Vienna gets its first trans crosswalk

The city of Vienna has now also decided to set a highly visible sign against discrimination. In the future, it will be possible to cross a trans crosswalk here. This was inaugurated this Friday as part of the "Trans Awareness Week".

The week is intended to draw attention to the fact that there are still many people who are excluded from society or discriminated against and even threatened with violence because of their sexual orientation as transsexuals.

The new crosswalk is located in the Neubau district. Here it is intended to provide more visibility for the transsexual community.

The trans crosswalk against discrimination

In a detailed press release, a little more detail was given on the new crosswalk. Among other things, it says here that with the help of the stripe a "sign against discrimination should be set at a central and particularly heavily frequented place".

And indeed, the Neubau district is one of the places in Vienna where a particularly large number of people live. Accordingly, it is likely to attract a lot of attention here and thus make an important statement in everyday life that may be noticed by some only in passing, but nevertheless.

Anyone who wants to see the new trans crosswalk should head for Vienna's Volkstheater. Right here, the strip represents a kind of connection to the Museumsquartier. Thus, it is an important sign in many respects. After all, the Museumsquartier and the Volkstheater are important cultural highlights that are also visited by many tourists, among others. So it should already be clear that the colorful stripes will manage to attract a lot of attention. Or - as it also says in the press release: an "unmistakable sign against discrimination".

ALSO INTERESTING:
Russian sims are not allowed to be queer

By the way, it took some time before the plans for the trans crosswalk finally came to fruition. Already about two years ago, a corresponding application was submitted. 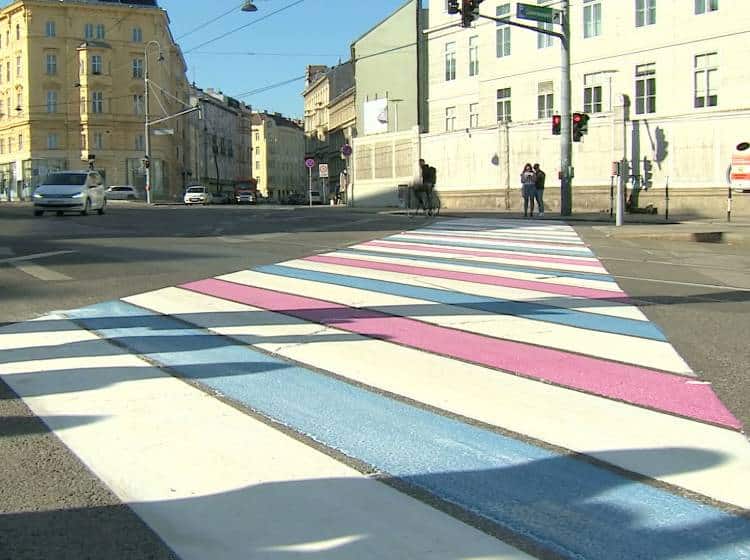 Trans crosswalks and their meaning

Trans crosswalks, or Pride crosswalks in general, are by no means ordinary crosswalks. The statements that can be associated with these works of art extend to many levels.

Among other things, it is about more visibility for the queer community, but among other things, it is also about integrating the signs in such a way that they are perceived as "quite normal".
Unfortunately, statements like these have been soiled again and again in the past, but also fortunately always cleaned and restored to their original state.

The special thing about Vienna's trans crosswalk is that it once again emphasizes transsexuals within the community as a permanent fixture. Whoever used to think of queers and Pride, usually inevitably thought of gay, lesbian and bisexual people. But: the rainbow has become far more colorful over time. And more and more transsexuals are fighting today not only for their rights, but also for their position within the community.

And it is precisely this belonging that the new trans crosswalk is intended to emphasize once again. This new "traffic accessory" may not necessarily have an influence on people's thinking, but it will nevertheless be a sign of how harmoniously living together can actually work and how easy it is to integrate queerness into everyday life ... on all levels.

Here you can find all important information about the Swiss study "Tolerance & Education".